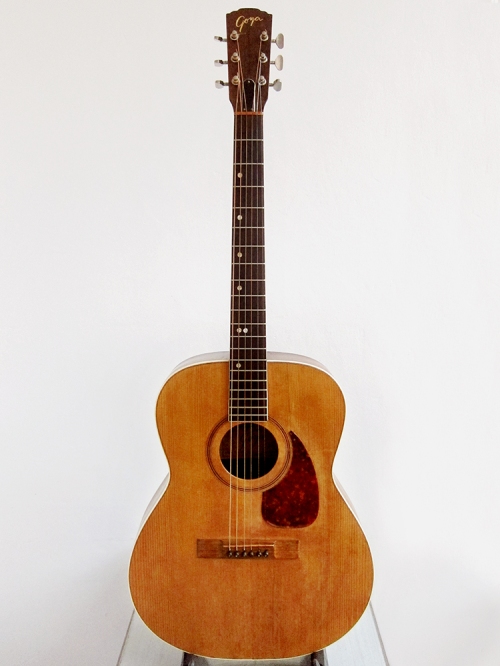 I finally managed to get another Levin LT-16, just like my dad’s old guitar that I learned to play on as a kid. His is a 1966 Levin branded one and this one is from 1965 and has the Goya logo on the head stock. These guitars normally don’t come up for sale that often, I guess because they are really well sounding and perhaps the 000-size is very sought after too. It took two years but finally I managed to get my hands on one, in bad shape when it arrived but now fully playable again. 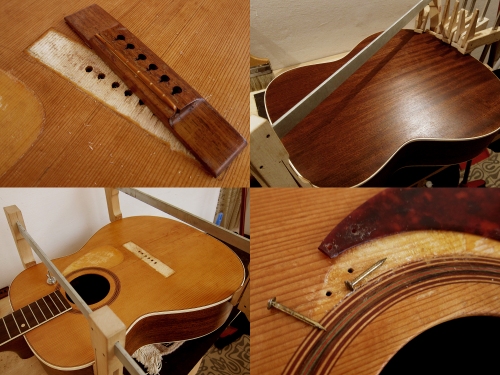 There was quite a lot of work on this one. First I re-hydrated the guitar for a week, just a wet sock in a bowl inside, which made the cracks close up quite a lot. I removed the bridge and the pickguard and glued all the cracks on the top and reattached the back that was coming loose. I also flattened the top, it had a bit of a belly that I managed to get down with a flat piece of wood covering the top that I clamped down for a couple of days.

I re-glued the bridge and replaced the 10 cm of missing binding. Someone had also sanded down the neck, which I hate, so lacquered it with a couple of coats of Nitro and sanded it smooth.

Levin guitars normally lack side dots for the 9th and 12th fret, which always confuse me while playing, so I added 3 dots. I reattached the pickguard and cleaned up the original Van Gent machine heads. Levin uses a rather clever bolt-on neck system which makes neck-resets very easy. You just loosen the two bolts inside and then you can sand down the heel, it takes time but it was easier than removing the whole neck.