When I grew up back in Sweden we always had this old acoustic guitar standing in a corner. It was from my father and I never knew what make it was or how old it could be, my mum just told me that my dad bought it second hand in the early Seventies. Someone had sanded off the name on the headstock and taken off the sticker inside before my dad had bought it. I learned to play on this guitar and it’s still one of my favourites because of the thin neck and slightly smaller body. I recently had an epiphany and found out what guitar it is. About a month ago my girlfriend and I was watching a film and suddenly I got this weird feeling that I actually knew what make my dad’s acoustic guitar is, I recognised the head shape.  I was convinced, it’s an old Levin. I have always thought that it was a Japanese guitar since the pickup looks like one of those Japanese gold foil pickups from the Sixties. I stopped the film and started to search for Sixties Levin guitars and managed to find a very similar one in a vintage guitar shop in Stockholm. I found some more info on the model and now even the serial number on top of the head made sense. It is a Levin LT-16 made in Göteborg, Sweden in 1966. The nickel plated individual Van Gent tuners with metal buttons can be found on Hagström guitars from this time as well. I wish that we would have taken better care of it over the years and that I wouldn’t have been so hard with the pic when I first learned to play but at least now after more than four decades of family confusion we know what it is. It’s a Swedish Levin. 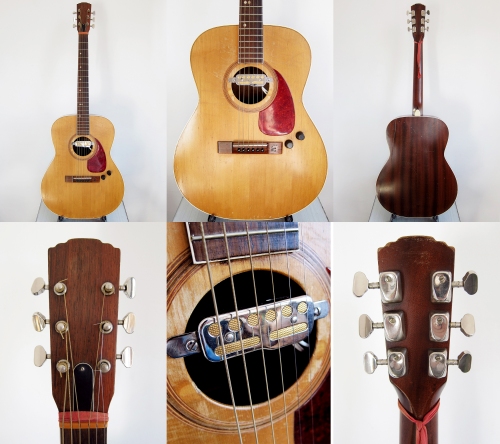