I guess people might have noticed that I’m quite obsessed with Levin guitars, but there are actually other Swedish guitar brands that I care about too, like Hagström Crafton, Bjärton and Lugnås. I recently found my first steel string Bjärton, I have had a nylon string since my mid teens but never actually played on a steel string Bjärton until now. This is an awesome looking Hagström B-60 or Bjärton B-60 as it was called in Sweden, it’s the same guitar but since Hagström was more famous abroad they used that name for the export models. They were built by Bjärton in Bjärnum in the south of Sweden. It’s a pretty great guitar, loosely modelled on a Gibson J-50, Bjärton made a legendary Gibson J-45 copy in the Sixties called Hagström H-45 or Bjärton J-45 which was used by David Bowie and a lot of others. That model came with or without factory installed pickup and they even made a 12-string version. This Hagström B-60 is slightly more modest and looks pretty basic. It’s a nice sounding guitar, even though it has a bolt-on neck which should kill the tone completely, I guess the solid woods and massive neck block is helping with the sound.

The guitar was in pretty good shape when it arrived. I did the normal cleaning, polished frets and oiled the fretboard and then installed a bone saddle and ebony bridge pins to improve the sound 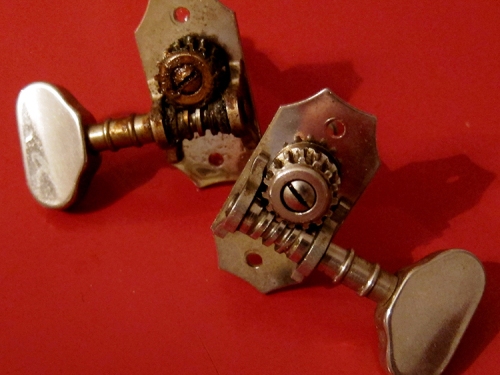 My main challenge was to try to get the Van Gent machine heads clean. The guitar smells like it has spent the past 40 years in the company of an old pipe smoker so I assume that’s actually tar and nicotine that has built up over the years. I’m an old ex-smoker myself so to me it smells like pure heaven.

I’ve mentioned before that I really enjoy watching Guitar Moves, but this episode is really hard to beat, freaking Keith Richards!

A couple of weeks ago I came across a really nice looking Harmony Monterey H1325. The only way to date these guitars is by the second stamp inside, if you can find it, giving the year and month. Unfortunately I can just see 784H1325 and the second stamp JAN in mine. I assume it’s from the late 1950’s judging by the head logo and the lack of trussrod since that was introduced in 1964. It’s a really nice playing and sounding guitar, not as loud as my Levin archtops, the 1951 Levin Royal or 1946 Levin Model 32, but still a very nice guitar. Harmony guitars were mass produced in Chicago during this time and even though they are made from solid woods they feel a bit low budget, in a good way, I guess that’s why they are so damn awesome and look so rock n’ roll.

There was a lot of cleaning to do and two cracks that needed to be glued. One large on the upper bout and a smaller one on the top and then I glued down the heel a bit better which got the action down. Except for that it was in pretty good shape for being around 60-years old and all original.

The original case has these awesome looking shipping stickers on it, I presume from when the guitar left America for Germany by boat in the 1950’s carried by the first owner.

The top left looks very much like my Harmony Monterey, having said that, the model number inside mine is H1325 which match the bottom left. Taken from a 1959 Harmony catalogue

I also got myself two late 1960’s H162 from the US that I need to restore. First of all they need a neck reset but then I was actually thinking of removing the back and X-brace at least one of them. Taken from a 1959 Harmony catalogue.

Last Saturday I got a chance to play with my friends Cherry & Wolf again. It turned out to be great fun and it seems like I have a few more gigs lined up with them this autumn. Now you can see where the Luxor Dove copy went, it’s Wolf’s main guitar and I’m playing on my beloved Morris W-50.