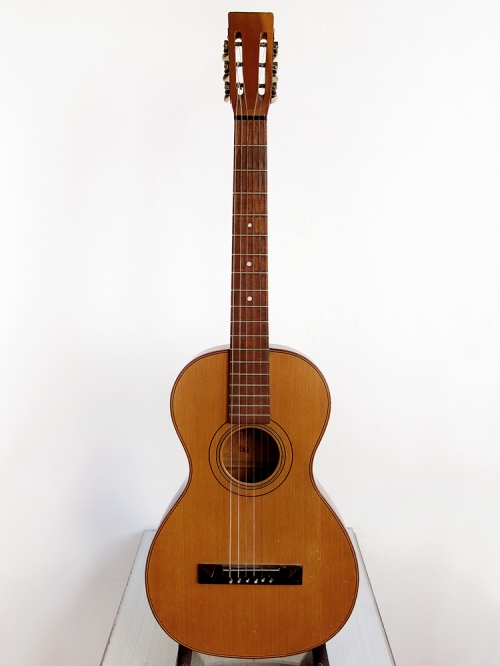 Levin Model 3 Parlour Made in Sweden 1914

In the year of our Lord 1914 a terrible war broke out in Europe, at the same time this beautiful guitar was made in Sweden. I finally found myself an old Levin parlour, a 1914 Levin Model 3. When I sold the Levin Model 65 back in December I promised myself to find another Levin parlour, but older, and nicer. I did, it took 10 days. I was super lucky and managed to win this Model 3 on an auction the day before Christmas, perhaps that’s why the competition wasn’t so fierce. It’s in pretty decent original shape for being 103 years old, no real damage to it. It looks like the back has been removed and glued back at some point so I guess someone has re-glued some lose braces. I can’t see any signs of a neck reset but since it’s so playable after 100 years I assume that someone has done that too. I love the original machine heads with their bone buttons and the brass medallion on the back of the head is just beautiful. It sounds way better than I expected. I’ve had a couple of early German parlours at home and they have sound very thin, weak and boxy somehow. This Levin is loud, clear and warm at the same time, even though it’s ladder braced. For being one of Levin’s cheapest models I think it’s an amazing guitar and it looks stunning in it’s simplicity.

The back and sides are made of birch that is painted to look like Brazilian rosewood. I would have preferred the real deal but I guess it was both expensive and hard to come by exotic woods at the time.

The stamp on the right side is from Frälsningsarmén, The Salvation Army in Stockholm. I assume a lot of songs about Jesus has been played on this guitar over the years.

The old Levin factory on Norra Larmgatan 4 in Gothenburg, Sweden, around 1920. Taken from Vintage Guitars Sweden