VOX, Made in Japan 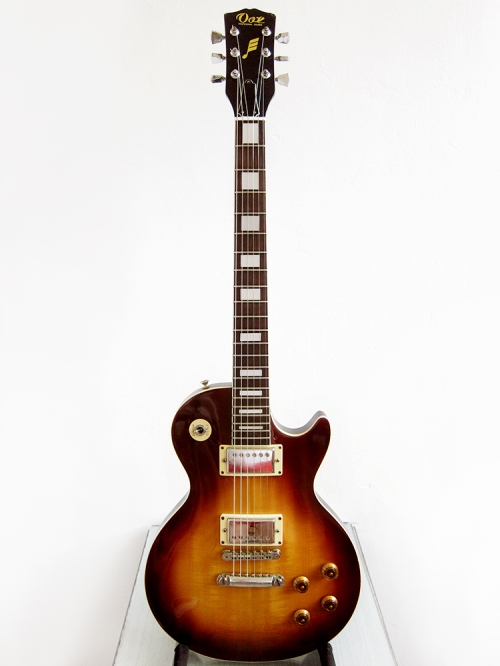 I recently found a nice looking VOX Les Paul copy that I couldn’t resist. I had decided not to buy any more Les Paul’s after I sold my Westone a few weeks ago but this was just too nice to miss out on. It has a bolt on neck, which you could either hate or love, I’m fairly indifferent myself and you can read why here. The good part with bolt on necks is that they are so easy to adjust. It’s fairly common that older Les Paul and SG guitars with set necks gets a hump over the neck joint, something that can cause buzzing and you have to either raise the action or level the fretboard to get rid of it. The bad part with bolt on necks is the second hand value, a lot of people are still a bit racist when it comes to Gibson copies with a bolt on neck even though Gibson built a few themselves in the early 1980’s. What I fell in love with on this VOX was the flame top and the thickness of the neck, it’s so nice. It feels even fatter than my Tokai Love Rock LS-55 which has a fairly accurate 59′ Les Paul neck. This VOX even have the small head as the real Gibson of the late 1950’s and the pickups sounds pretty close to my old Westone. The only thing that is annoying me a bit is that I haven’t figured out who built it yet. There is no info about VOX in my list of Japanese guitar brands, well there is a Magnavox and a Univox but that’s not the same. The only thing I know is that when VOX stopped making guitars in the UK they moved to Italy before they ended up in Japan. The build quality is not as good as my 1991 Tokai Love Rock LS-55 or my 1980 Greco EG-600C, but it’s easily on the same level as the Westone which was built by Matsumoku. Even though I really enjoy this Les Paul I have too many guitars and is therefore up for sale.