Rondo, built by Levin in Gothenburg Sweden in 1960

Today is wife’s birthday so tried to be a good husband and got here an old guitar. I found her a little Rondo, a mail order guitar built by Levin in the late 1950’s. I have actually never seen one of these before so I was quite exited when it arrived. It surely feels, plays, smells and sounds like a Levin. Rondo was made by Levin for Musik AB Westin & Co, a music store and publishing company in Stockholm with a large mail order business. It looks pretty similar to a Levin 119 and was made for both steel and nylon strings, this was pretty common on smaller Levin guitars in the 1950-60’s. It’s a very nice little guitar to play and it has more volume and sounds sweeter than I expected, perhaps because it’s fan braced instead of ladder braced. My wife seemed very happy with it too when she got it this morning.

It was in pretty good shape when it arrived. I had to glue a couple of small cracks, polish the frets, oil fretboard and machine heads and give her a good clean but that was it. The only problem was that this had to be done when my wife wasn’t around so I’ve been a guitar repairing ninja for the last week. 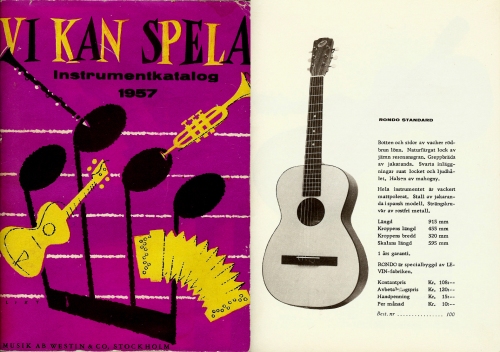