How to… refret a guitar 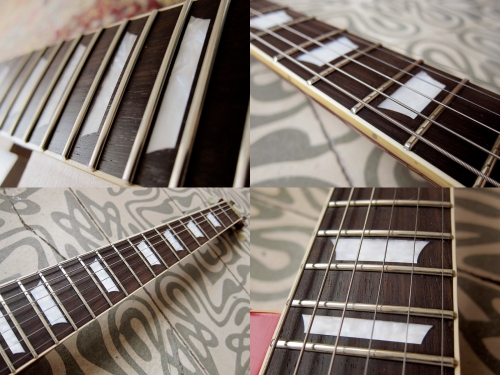 Here is a little update on my previous post on How to… refret a guitar. It turns out that maybe it wasn’t as easy as I first thought to level, crown and polish the frets on a guitar. I have had some small issues with both the Tokai that I refretted and my old Claescaster that I levelled the frets on. I didn’t pay enough attention to the height of the frets and I hardly used the fret rocker the first time around. This resulted in some buzzing when some frets were pressed down. I have now levelled, crowned and polished both guitars again and checked every single fret with the fret rocker to make sure they were all the same height. It would probably have helped if I had glued in the frets on the Tokai when I refretted it, which I didn’t in case I needed to take them out again for some reason. I think the frets not being glued in combination with the difference in the neck with and without the tension of the strings was enough to cause problems with on the Tokai. Now I when I levelled it again I pushed down the guitar to simulate the tension of the strings and that worked pretty well. The Claescaster was a lot easier, that was just a case of paying a bit more attention when I levelled the frets and actually use the fret rocker properly. When I first attempted to level, crown and polish frets it was evening so it got pretty dark and my main light source was the ceiling lamp above me. I have since learned that it’s a lot easier to get this done properly if you have light coming from the opposite side of you. This time I was working in front of the windows and had an even flow of natural light coming in which made it a lot easier to see if the frets were even and later during the polishing stage, if they were smooth enough. Both necks still feels a bit weird but I think that after a couple of hours of heavy playing, not playing heavy music just playing a lot, they will settle and even out a bit. Normally guitars feels weird even after just adjusting the bridge saddles, imagine after changing all the frets. 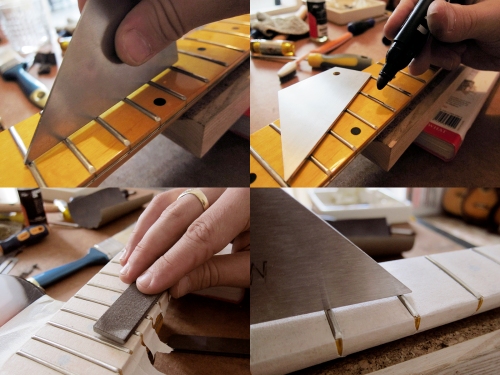 I checked every single fret with the fret rocker and then marked any parts that was higher with a black marker. I levelled the frets and took extra care with the problem areas. I used a small Bahco file this time instead of the long fret leveller that I used last time. I checked with the fret rocker, levelled a bit more and then checked again until it was perfectly even. 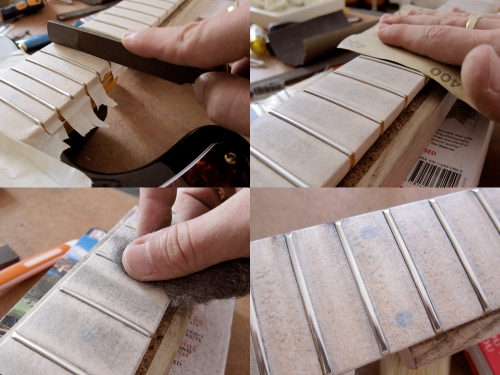 When everything was levelled I just had to crown the frets again and then polish them. I’ve realised that these little aluminium fret board protectors that I have used in the past doesn’t really work. If you have levelled and crowned the frets you have to run a sandpaper over the whole fretboard, feeling every single fret with your fingers to round them off, that’s the only way to get them smooth and nice. For that you really need to do it properly and tape the whole fretboard to protect it.