The Claes Anderson EP is now up on Spotify and all other digital platforms.

Claes Anderson’s first single Your day will surely come from their upcoming EP was officially released this past Friday. https://youtu.be/GG6Lsu42Dxg 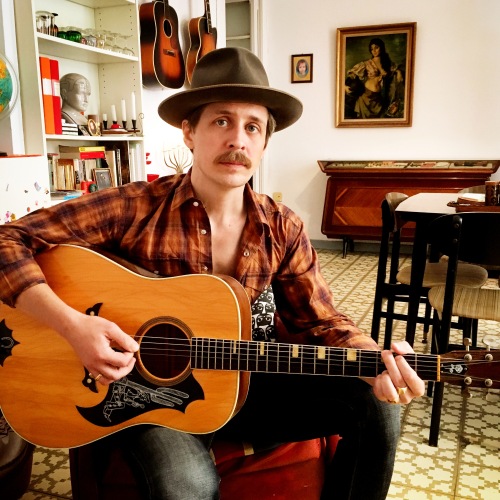 I was invited to be a part of Bring It Home Music and did a tour of my home.

Last week I changed the pickup in my new Martin HD-28LSV. It came with a LR Baggs Anthem SL installed which sounded good but I had a feeling that a LR Baggs Lyrics might sound even better. I’m also not a big fan of having things stuck under the saddle, when I installed the LR Baggs Anthem SL in my 1966 Goya T-16 I felt that the tone died a bit. I’m sure there might be some other pickup system out there that is even better, but for me, nothing beats the Lyrics for the dry and woody sound that I am after. Now I have the LR Baggs Lyrics system installed in my 1981 Sigma DR-41 and my 1968 Levin LT-18, my main guitar for the Claes Anderson Band. I really enjoy this new Martin HD-28LSV and will use it for our gig tonight at La Sonora de Gràcia but I think I will stick to the 1968 Levin LT-18 as my main guitar for playing live, it’s Swedish and just looks nicer on stage. Here is a quick comparison of the LR Baggs Lyrics and the LR Baggs Anthem SL.

I recently installed a LR Baggs Lyrics in my 1968 Levin LT-18 and I’m well pleased with the result. This has been my main guitar for the past year and I’ve already tried a LR Baggs M1A, M80 and now a Lyrics. I’ve had a LR Baggs Lyrics installed in my Japan made Sigma DR-41 for about two years but I never really use that guitar since I have so nice Levin guitars to play on. The Sigma sounds fantastic with the Lyrics so I decided to leave it there and buy a brand new one for the LT-18 instead. The LR Baggs Lyrics sounds similar to the LR Baggs M80 but better, more natural and woody. I’ve also had a lot less feedback issues with the Lyrics, the M80 has been a nightmare with a full band on stage. Here you can compare the LR Baggs M1A, M80 and Lyrics fitted in the same guitar, a 1968 Levin LT-18. 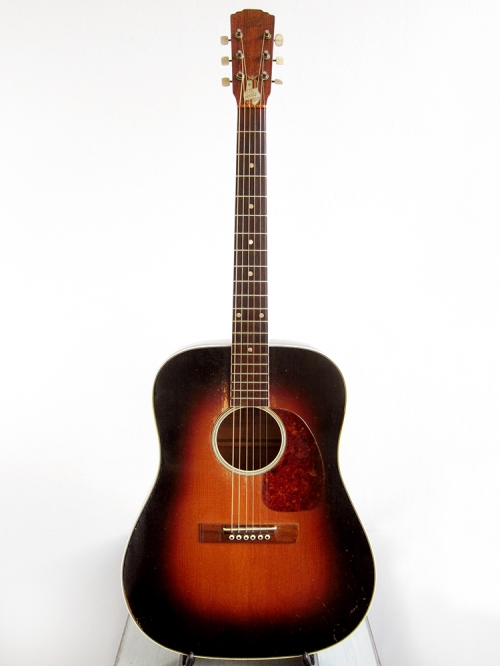 In the end of March, about 2-3 weeks after I bought the 1963 Levin LM-26, I was offered a 1959 Levin LM-26 that I couldn’t resist, even though I already had one from that year. The seller Ian was quite persistent that I added his guitar, that he had owned since his 14th birthday in 1976, to my Levin collection so I of course complied. The guitar has been used playing anything from jazz, Mississippi blues to Celtic folk and now country, read Ian’s guitar history. Now I have one Levin LM-26 built in 1963 and two from 1959, well they actually both has a body stamped in 1958 but with a 1959 neck, not sure if they did a lot of bodies one year and necks the next. I have some Levin LT-18 that has a Goya serial number stamped inside and a completely different Levin serial number on the head, I guess these things happens at a guitar factory. This 1959 Levin LM-26 seems to be completely original, it even has the cheap looking machine heads that Levin used in the late 1950’s on the LM-series. On my other 1959 Levin LM-26 the machine heads were replaced by open back Grover’s by the second owner back in 1965 and I think I might have to do the same on this one. I like the ones they used on the Levin LS-18 at the time, they are rounder and look more Gibson like, these square ones look like something from an Egmond or a kids guitar. The guitar plays really nicely and sounds great, really full and warm as could be expected of an all solid Swedish built guitar from the late 1950’s. 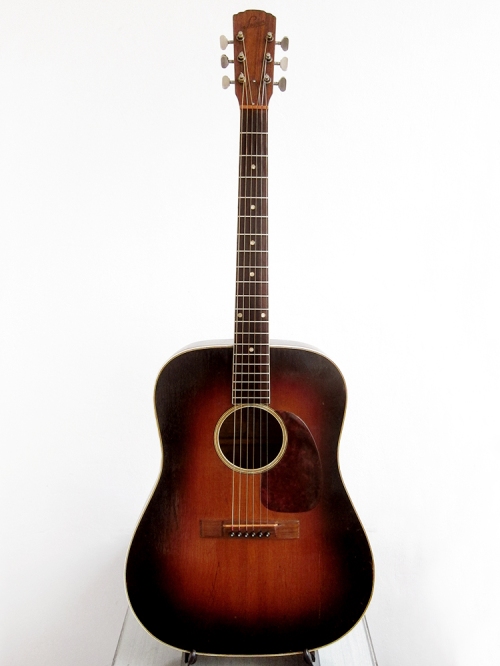 Two weeks ago I got myself another Levin LM-26. My previous one was built in 1958/59 and feels a bit fragile, it is also in a pretty good state for taking out gigging. So this 1963 Levin LM-26 felt perfect to fit a LR Bagg M1A in and take out and enjoy on stage. Guitars are meant to be used and played, even vintage ones, so in a way I would be happy to take any of my Levin’s out of the house. It’s just that some of them feels a bit too well kept for the dangers of having them in bars around drunk people, and myself slightly intoxicated hitting them harder than I should because I play with a loud band and can’t hear myself properly and such, you all know how it is. Anyway, now I have a great backup acoustic for playing live and I was missing something in sunburst to match the Claescaster I put together four years ago.

I had to do the normal work to it, reset the neck by sanding down the heel. Fill all the dents and marks on the back of the neck with Nitro lacquer and then sand it smooth. Take the machine heads apart and clean them properly before I greased them up and put them back on. Cut a new bone saddle and then paint both the saddle and nut to match Levin’s original squirrel coloured Galalith parts. Polish frets, clean and oil the fretboard and then a general good clean of the whole guitar. If you want see pictures of any of this than have a look at how I restored the old Levin LM-26.

Claes Anderson Band – Standing tall over the ones that have fallen, The Cavern Club, Terrassa 17th March 2017

We had a gig last weekend and it was great fun. It was our second gig ever, actually our first one with a drummer so things are still a bit shaky. Jordi from Rodeo Rose has joined us on drums and it feels like we are slowly finding our roles in the band. I got a chance to play electric guitar on 8 out of 19 songs which was great fun, I haven’t played electric for 2-3 years. I played on my 1968 Levin LT-18, like last time and my 1977 Greco Spacey Sounds TE-500N which sounded pretty great. I’m already looking forward to our next gig, I think we will play in Barcelona in the beginning of April. Thanks again to Toni from Legends for booking us without actually knowing what he got himself in to, we really appreciate it. 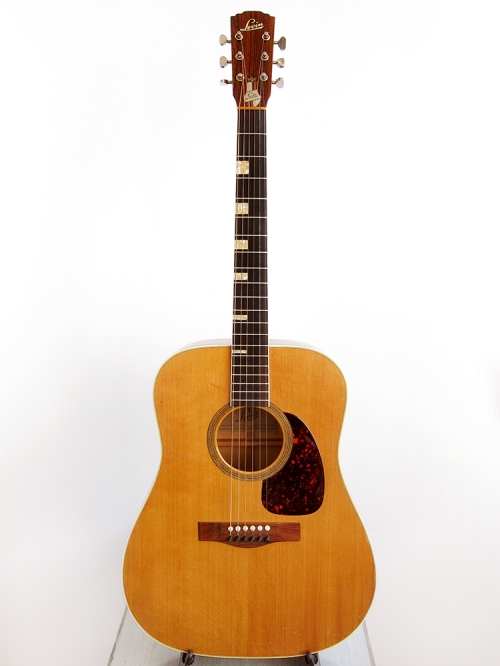 I’ve tried my best not to buy more guitars, hence why I’m selling most of my Japanese acoustics. Having said that, if a Levin LT-18 shows up on eBay and the seller contacts me via email, after a couple of shamefully low best offers from my part, and I happen to lie at home with pneumonia, it was just impossible to resist. I’m so weak for these top of the line Levin flat tops from the 1960’s, they sound amazing and they are pretty rare to find, people tend to cling on to them until they die, and then their kids will sell them. It’s also quite rare to see a Levin branded LT-18 for sale, I already have a Goya T-18 which is the same guitar but branded Goya for the US market and they tend to be a bit easier to come across. I always prefer early to mid 1960’s Levin guitars, before they opened the new factory in Lessebo in 1965, having said that, most of my Levin guitars are actually from 1965-1966 and they sound pretty damn amazing. This one from 1968 is pushing it a bit, I thought it was from 1967 until I got it home and could check the serial number properly. The problem after 1967 is the new invention of Levin, the individual height adjustable plastic saddles, I hate them. I will have to carve a new bridge in ebony, to match the fretboard, and cut a slot for a real bone saddle.

There were two things that I couldn’t stand with this Levin, first the lack of lacquer on the back of the neck, and then the rosewood bridge with the individual height adjustable plastic saddles. I’m not sure how they managed to loose most of the lacquer on the back of the neck but that was easily filled in with a couple of layers of Nitrocellulose lacquer. The second part, with the rosewood bridge and the plastic saddles is something we are going to have to deal with. The sound is not terrible with the plastic saddles, it ads a kind of 1960’s Gibson bass to it but it lacks a lot of clarity in the trebles and I always prefer a bone saddle. I also don’t like the look of a rosewood bridge to a ebony fretboard, they should match. I will try to carve a new bridge in ebony as soon as I get time.

This Levin LT-18 was apparently owned by Brian Griffiths from The Big Three, a Liverpool band that was active during the days of The Beatles. However, since the guitar was made in 1968 he must have bought it long after the Liverpool glory days were over.