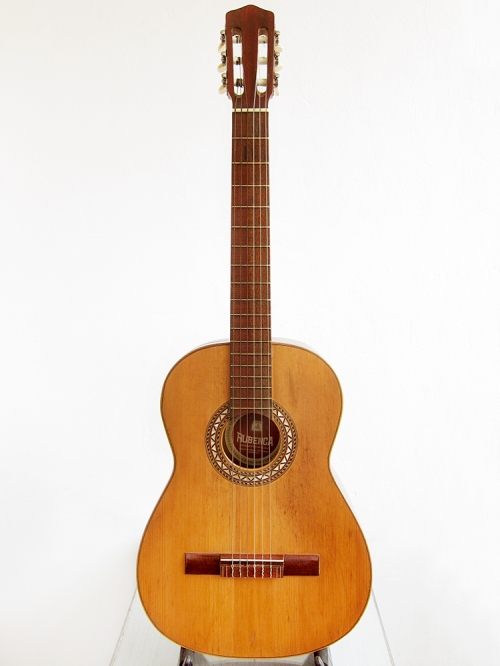 Rubenca Spanish Guitar made in Zaragoza in the 1960’s

My guitar playing days started with electric guitars and I never really cared much for acoustics until I moved to Spain in 2010 and now acoustic guitars are my main passion in life. Another thing I never used to pay much attention to was Spanish guitars but after moving here I have occasionally come across some that I really liked, especially my Francisca Montserrat but also the Juan Estruch I got for my friend Rafa. This is one of them, a Rubenca Spanish guitar made in Zaragoza most likely in the 1960’s. The only info I found about the brand is that Rubenca is music store in Zaragoza that is still in business so I assume these guitars were made somewhere in the area and sold as their own brand, unless they made guitars themselves back then. Like most Spanish guitars from the 1960-70’s it has some parts that is way above what you expect, like all solid woods, how well they sound and especially the fancy mother of pearl inlays around the soundhole on this Rubenca. At the same time I’m always surprised how cheaply looking the fretboards tend to be, why they never bothered to smooth out the frets, why the braces seems to be cut with a freaking axe or why the machine heads never work after 50 years. I found this Rubenca when I was down in the south a couple of weeks ago to see my wife’s family. I bought it for the fancy inlays, I’ve never seen anything like that on a Spanish guitar before, but was straight away taken by the the sound and quality of the guitar. The original machine heads still work, the neck is straight and the action is still ok for a guitar that lacks trussrod. I actually didn’t have to do much more than to give it a good clean when I got it. This guitar is for sale, even though I like it a lot, but I can’t justify having more than one Spanish guitar since I hardly play them.

The Rubenca has it’s wear and tear, like a glued crack in the side, but still, the beautiful inlays and the patina makes it’s all worth it