The Red Special is an electric guitar owned by Queen guitarist Brian May and custom-built by him and his father, Harold. The Red Special is also sometimes named in reviews as the Fireplace or the Old Lady, both nicknames used by May when referring to the guitar. A guitar that would define Brian’s signature style, it was purposely designed to feedback. He has used it on Queen albums and in live performances since the band’s advent in the early 1970s. The name Red Special came from the reddish-brown colour the guitar attained after being stained and painted with numerous layers of Rustins’ plastic coating. The name Fireplace is a reference to the fact that the wood used to make the neck came from a fireplace mantel. The pickups are three modified Burns Tri-Sonic and the tremolo system is known as the knife-edge tremolo as it features a knife-edge. The tremolo rocks on a knife-edge that is linked to a couple of motorbike valve springs in the guitar. The tremolo-arm itself was made from a saddle bag carrier from an old bike and a knitting needle from his mother.. Wikipedia 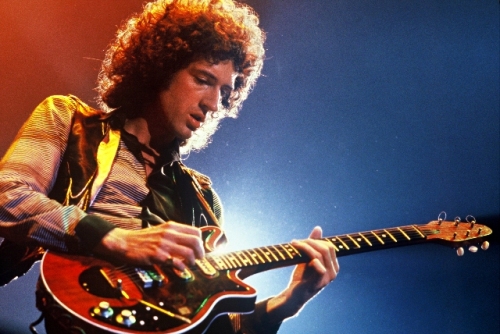