Tag: remove the neck on an acoustic

How to… reset a Levin neck 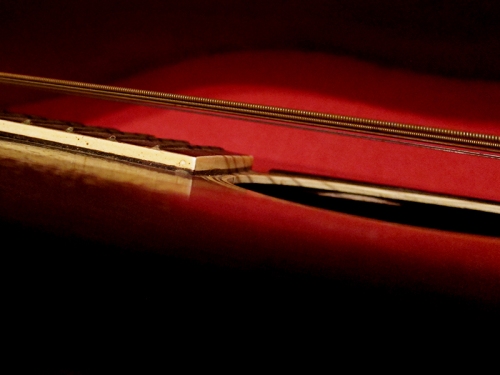 I’ve been very lucky and managed to get my hands on a couple of really nice Levin and Goya guitars over the last year. I would probably have thought twice about getting any random 50 years old acoustic since the action is normally a bit of an issue but with Levin it’s quite easy to reset the neck. They have been using a bolt-on neck system since the 1950’s which makes the job pretty manageable. 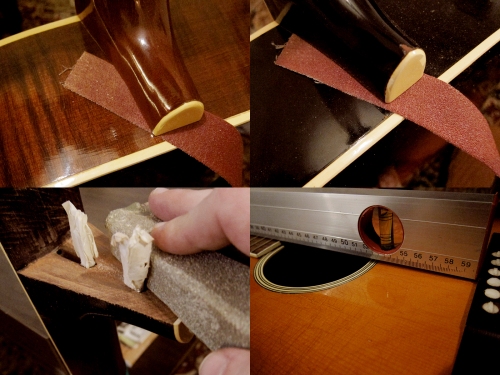 Remove the two bolts that attach the heel with the neck block, you can see them if you look inside. A normal Philips no 2 screwdriver fits if you don’t have a square Allen key. The heel is normally not glued in so you will feel it loose as soon as you remove the bolts. If not, apply a bit of pressure upwards to loosen the heel. Now you will be able to fit a sanding strip under the heel and can start to sand it down and that way change the neck angle and lower the action. Apply a bit of pressure on the neck and just pull, it might take 40-60 pulls on each side so so be patient. Check the neck angle with a straight edge once in a while so you don’t take it too far. As long as the straight edge doesn’t go over the bridge it should be fine. I have done the sanding strip trick on two guitars so far, my Goya T-18 and a Goya 163. On my Levin LM-26 I felt it was better to remove the whole neck so that made the sanding process even easier. 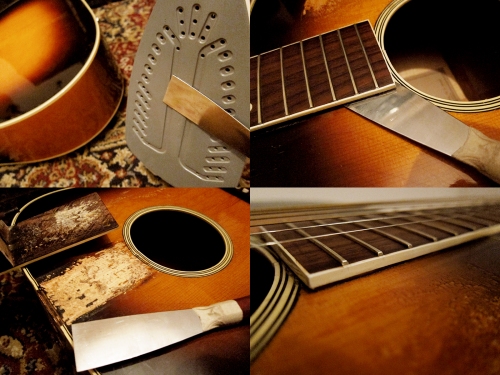 Update: January 27, 2014 I needed to sand down the heel a bit further on my Goya Model 163 and realised that the fretboard started to come loose. It looked and felt just like the bridge, like the glue had dried up and started to crack and fall apart. I tried a new trick that I learned on Youtube, to heat up the spatula instead of heating the neck, like a did on my Levin LM-26. My God, this was so easy and quick, I think it took me 7 min to remove the neck. When I had sanded down the heel a bit further I glued the neck back with some fish glue and a couple of clamps. 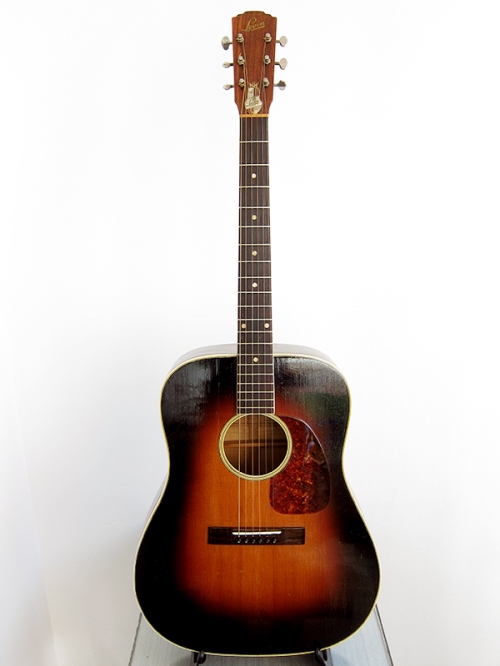 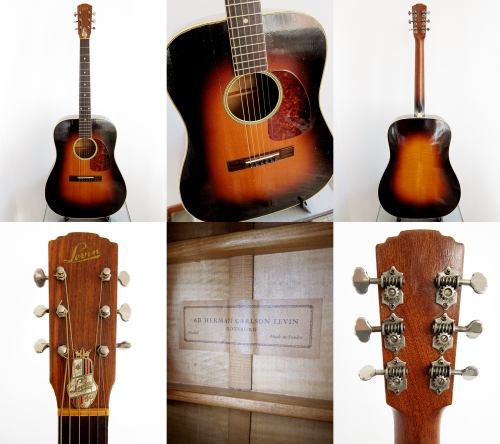 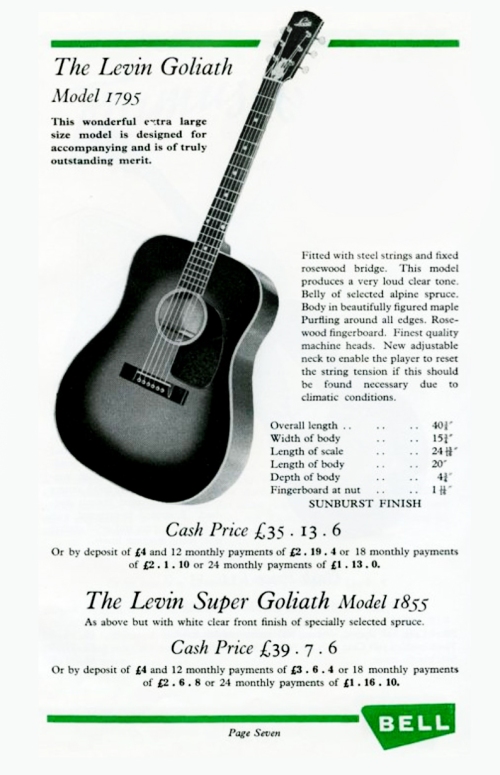 As I mentioned in my previous post about Levin I managed to win a Levin LM-26 on eBay back in December. It turned out to be in a worse state than I expected which I guess is both good and bad. Bad because it’s unplayable so I still don’t know how it sounds, good because I’m forced to learn a lot of new things, like how to remove the neck on an acoustic guitar. The Levin LM-26 was sold as The Levin Goliath Model 1795 in the UK and I think they sold pretty well, even Pete Townshend had one. They have spruce top with flame maple back and sides, all solid as always with Levin. If you want to know how old your Levin or Goya is then check Vintage Guitars Sweden. Levin serial numbers / Goya serial numbers 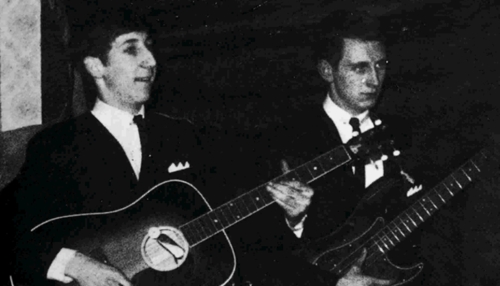 Pete Townshend is playing a Levin Goliath LM-26 in 1963 with Detours, later The Who 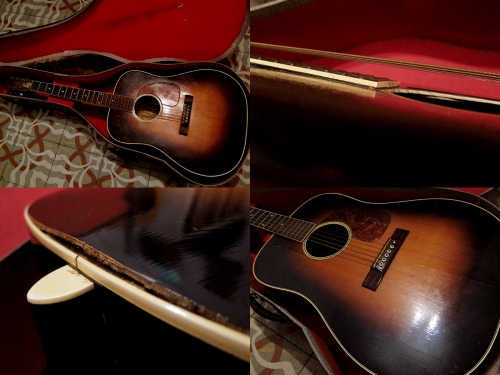 Levin LM-26 from 1959, well the body is actually stamped with a number from 1958, the year this model was introduced. I’m not sure if they used an old body when they put they guitar together at the Levin factory in Gothenburg in 1959 or if someone changed the neck when the guitar came to the UK. The previous owner for the past 51 years, Roger, bought the guitar second hand in 1963 for £40 from Bill Greenhalgh Ltd, 125-127 Fore Street in Exeter. Roger changed the original machine heads to Grovers in 1965, it’s otherwise all original. The action was so high that I could almost fit my hand under the strings so I had to remove the neck and reset it. There are a few things that needs to be glued as well, the back is lose and there are 2-3 cracks in the top. 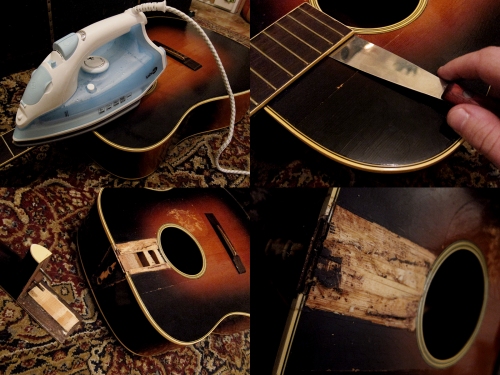 I have never removed a neck before so I was pretty nervous about this part. It’s supposed to be one of the trickier things to sort on an acoustic guitar but luckily this neck was fixed with the Levin bolt-on neck system which made it a lot easier. I removed the two bolts inside and the heel came lose straight away, now I only had to loosen the fretboard overhang. I removed the pickguard with a razor blade, cutting under the edge, just to make sure I wouldn’t melt or damage it while removing the neck. Then I used a normal clothes iron to heat up the fretboard, I don’t have any fancy pants Stew Mac tools or special gadgets. I heated up the fretboard for 1-2 min and felt with my hand every 30 sec to make sure it didn’t get too hot, I thought if I could still touch it maybe I wouldn’t burn or damage the lacquer on the top. It took ages to get it off, I think I probably spent 1-2 hours per night for 3 nights in a row on this. The glue loosened more and more and in the end I could get a flat screwdriver in and bend it loose. Unfortunately a chunk of spruce decided to stick to the neck instead of the body but to be honest I expected worse damage than that on my first attempt to remove a neck. I used my clothes steamer and steamed the spruce loose from the mahogany neck, it peeled right off, and just glued it back in the neck pocket again. 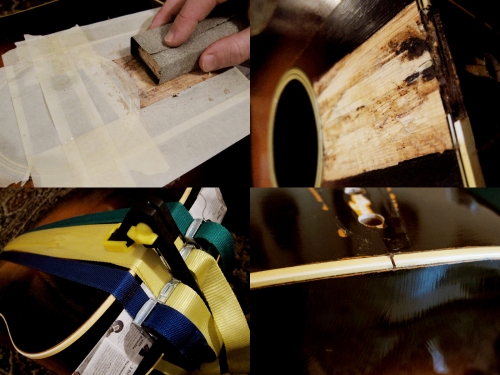 I masked off the top and sanded the pocket even so now the neck will fit fine once I’m ready to put it back on. I had to get the gap on the back closed. I’m not a master gluer and since you pretty much just get one shot, or rather it’s really annoying to remove and re-glue things if they aren’t perfect, I was a bit concerned about this too. I used plenty of fish glue and then 4 strong straps that could not only press in the back but also press down the the sides to close the gap as much as possible. I’m pretty pleased with the result, the gap is gone and it seems pretty solid. 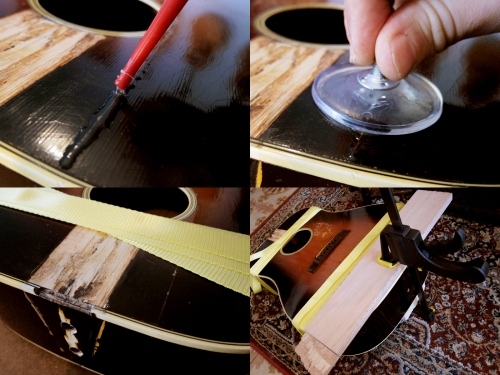 Next thing was to try to close the cracks on the top. One was all the way through and two was smaller hairline cracks. I filled everything with fish glue and used a suction cup to try to push in the glue in the cracks, I saw this on Youtube and it made sense to me so I tried it. Then I just strapped everything up and put a piece of wood the keep the main crack flat while it dries. 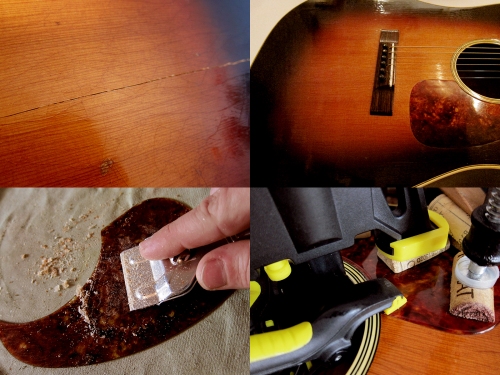 Once I had glued the cracks in the top, the first image shows before I started, I painted and lacquered the crack. I used normal matt black acrylic paint for the dark parts and just darkened the rest with furniture oil before I applied the nitrocellulose lacquer. Once the lacquer was dry I sanded the surface smooth with 400, 800, 1500, 2000 and 2500 grit. It worked really well, it’s actually hard to even see the big crack that went all the way from the edge to the bridge. I removed the old glue from the pickguard and then glued it back again. 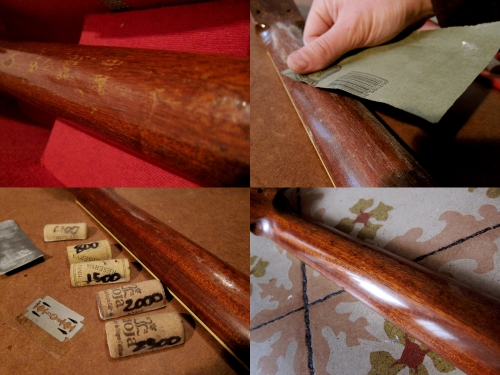 The neck was in really poor state, deep groves and marks all over it. I filled it with nitrocellulose lacquer, as mentioned in my previous post about how to repair lacquer damage. I had to take out the heavy artillery in order to get the neck smooth and used 180 grit. Then it was just a matter of sanding it back to it’s former shine using 400, 800, 1500, 2000 and 2500 grit. You can still see the marks but the neck is perfectly smooth and shiny again. 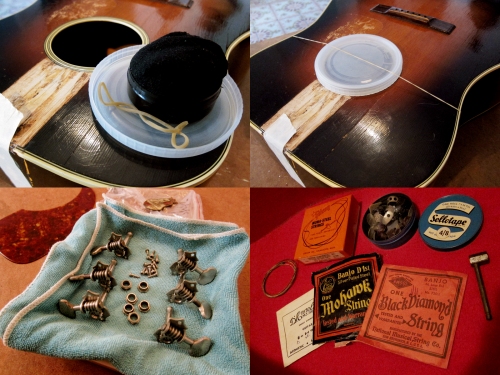 According to Roger the guitar has been stored in a back room in it’s case for the last three decades and I guess the humidity wasn’t ideal, hence the cracks. As soon as I got the guitar I started to humidify it with a wet sock in a plastic container inside the body and then sealed of the hole with a lid from a Mercadona lunch box. The Grover machine heads from 1965 got a good clean and is now oiled up and works fine. In the last picture you can see what lied hidden in the accessory compartment in the old hardcase. Old guitar and banjo strings, an old sellotape box full of fingerpicks and best of all, an original Levin trussrod key. I’ve been looking all over for one of these. Thank you Roger.