How to… Replace frets

Hagström Western 6 Missouri, Made in Sweden 1978

Last weekend I tried a trick that I had seen some old luthier in the US doing on Instagram, replacing the first three worn frets with the last three, instead of re-fretting the whole guitar. This seemed like a really good solutions for my 1978 Hagström Western 6 which had terrible wear on the first three frets. 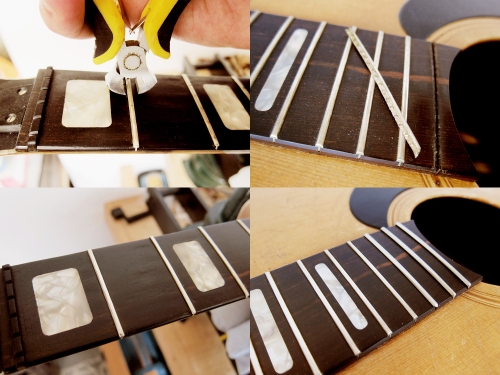 Greco Spacey Sounds TL-500, Made in Japan by FujiGen in August 1979

Yesterday the newest member of my Greco family arrived from Japan. I went a bit bananas last week when I saw that my favourite eBay seller Tokyowax was selling a Greco Spacey Sounds TL-500 so I bought it straight away. These Greco TL-500 are pretty rare, there are about 3-4 Greco TE-500, the Thinline version, for sale on eBay at the moment but I have only seen 2-3 Greco TL-500 for sale in the last two years. I’m not sure if they produced more Thinline copies in late Seventies than normal Telecasters or if people refuse to sell them, but you rarely see these and when you do they are normally very expensive. I got mine fairly cheap since one of the string ferrules on the back was missing. Well I shouldn’t really call it cheap and now the import tax from Japan had increased as well, I had to pay 95€ instead of the normal 75-80€.  I didn’t have to do much to her, everything was pretty well set up already. The frets looked pretty bad so I polished them, oiled the machine heads, tightened all the screws and restrung her. She plays amazingly, even better than my old mistress, my Greco Spacey Sounds TE-500 Thinline copy. It might seem weird that I put my old “Nancy”, my Fender Telecaster TL52-75, up for sale and then bought a new one the same week. The truth is that even though I love my Japan made Fender, I don’t dare to use it since it’s in such a good state. I prefer guitars that are older than me and have a couple of battle scars already. I guess I’m also a bit gay for late 1970’s Greco guitars.

The body has quite a few marks on it but the back of the neck is like new and that’s the only thing I really care about.

The frets looked pretty bad so I masked the fretboard and polished them with 400 and 800 grit and then wire-wool. It looked like they had put the frets on before they applied lacquer to the neck and then after 35 years of playing half of it had worn off. The electronics seemed to be in good order and the guitar sounded awesome when I plugged it in so no reason to mess with that.

How to… crown and polish frets

Last week I got all the parts needed to try to refret my Tokai, Since I have never done any form of fret work before I thought it was a good idea to practice on some guitars before I got down to business on my beloved Les Paul. The first thing did was to crown and polish the frets on my EKO Ranger VI. It was a bit scary, like always when you do things for the first time, but I soon realised that it wasn’t harder than anything else I done in the past.

I masked the fretboard and then crowned the frets with my Uo-Chikyu medium fret crowning file. I read that was good to use 400, 600 and 1200 grit sandpaper to polish the frets but I could only find 400 and 800 here in Barcelona. Either way, it felt like the main difference was made by the last step, the wire wool.

Once the frets was shiny on smooth from the wire wool I went over them one last time with a cloth and some metal polish and the removed the masking tape and oiled up the fretboard with lemon oil. I decided to change the machine heads as well, I had a set of open back grover copies that seemed to suit fine. I think the neck almost looks like new now.