I recently found a 000-sized Alvarez for my friend Wolf. It’s a really nice little guitar that we both were impressed by. These guitars were made in Japan for the US market and imported by St. Louis Music in Missouri, the guys behind Westone. According to Wikipedia and Alvarez own site it was the legendary Kazuo Yairi that founded the brand in 1965 to make cheaper Yairi guitars for the US market. Having said that, it’s still unclear if all Alvarez guitars were really made in the K. Yairi factory in Kani, Gifu in Japan or outsourced on other factories in Japan, see Jedistar. These early 1970’s Alvarez are a bit different to the later Alvarez-Yairi guitars that got famous in the late 1970’s and 1980’s when musicians like Crosby, Stills & Nash and Bob Weir endorsed them. Not only is the label inside and head inlays different, but they also seems to have their own models, the later Alvarez-Yairi are exact copies of the Yairi models of the time but made for export to the US. Since there is a sticker with a serial number inside that correspond perfectly to the Emperor code that K. Yairi uses things point towards the Yairi factory. As with everything made in Japan during the 1970’s, there are some questions we might never find the answer too. Either way we have an awesome Japan made Martin 000-18 copy that Wolf is very excited to play, especially with my Bill Lawrence A-300 in the soundhole.

The serial number starts with 48 which signify the 48th year of the reign of emperor Shōwa, which was in 1973. You can check the serial numbers of your Yairi or Alvarez here 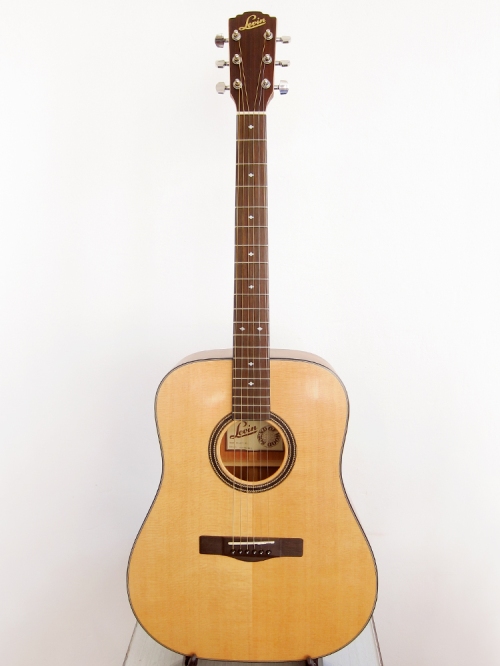 I finally got a chance to try one of the new Chinese made Levin guitars. Levin closed down the factory in Gothenburg, Sweden back in 1981 when Svenska Levin AB bought the name and the remaining stock. A small batch of classical guitars continued to be made in Sweden by Lugnås Gitarr AB, and are still made there today. During the 1990’s there were some electric guitars and amps being produced in the far east under the Levin name, my first amp that I bought around 1997 was Levin branded. It took another 10 years until we started to see some Levin steel string acoustic guitars, these being produced first in Korea, then Indonesia and later China. Of course it’s impossible to compare a Swedish made guitar from the 1960-70’s with something being produced nowadays in Asia but I’m still quite impressed with these new Levin guitars. I emailed the owner and he told me that they had some issues in the beginning to get the finish right and I have to admit that the build quality is far from a Swedish Levin but still, if you see it for what it is then it’s a pretty great guitar for the price.

A modern Levin, built in China for Svenska Levin AB 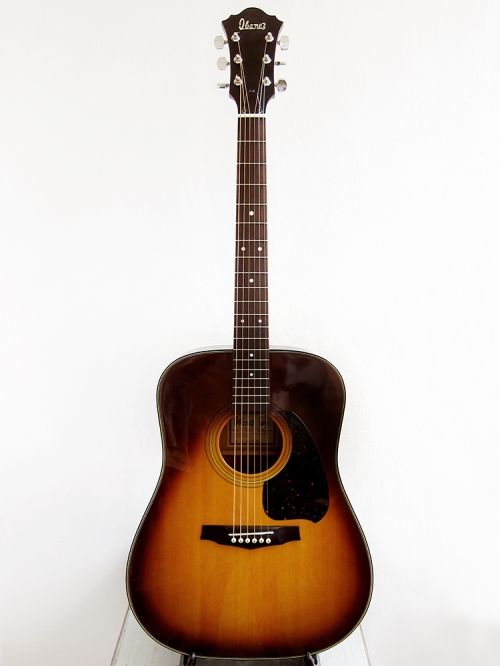 I managed to find another a Ibanez Vintage, just like the Ibanez V 300 BS that I got for my friend Miki back in July, but this time it’s a Ibanez Vintage 637 BS. I’m not really sure what the difference is between the V 300 and V 637 because they feel, look and sound very much the same but I assume this one should be a bit better since the model number is higher. Unless they used the old 600-series number for them in 1978 like the used on the Concord earlier and then changed in 1979 to a 300 series. Either way it’s a beautiful and very well sounding guitar. This guitar is now sold.

I only had to clean her up, polish the frets, oil the fretboard and machine heads and change the nut and saddle to bone and she was ready to go 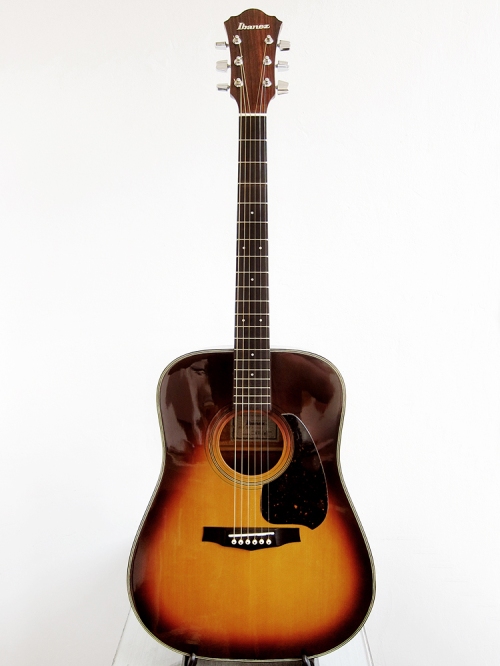 Last month I was asked to find a guitar for my friend Miki’s birthday. His girlfriend Laura thought that I was the man to source an old Japanese acoustic for him, well I found it and she picked it. Last night he received the guitar so now the surprise is over and I can write about it, he seemed very pleased to be a part of the vintage Japanese guitar club. It’s pretty similar in shape and sound to the Ibanez built Cimar D-320 I got for my friend Tomasz back in May. Even though they have a lot in common, this Ibanez felt both fancier and more solidly built. I really like the sound of these 1970-80’s Ibanez and they look pretty unique since they aren’t an obvious Gibson or Martin copy. I can highly recommend them if you find one for a descent price, they tend to be more in the Morris price range than Suzuki which I guess could be because Ibanez is such a famous brand.

I recently helped my friend Tomasz to find a nice Japanese acoustic and we ended up with this Cimar D-320. Cimar were made by Ibanez in the 1980’s as their cheaper brand and even though you seen them for sale quite often, I had actually never tried one. Ibanez is owned by Hoshino Gakki and based in Nagoya, Aichi, Japan. Hoshino Gakki also had semi acoustic, nylon and steel stringed acoustic guitars manufactured under the Ibanez name. Most Ibanez guitars were made for Hoshino Gakki by the FujiGen guitar factory in Japan up until the mid-to-late 1980s and from then on Ibanez guitars have also been made in other Asian countries such as Korea, China and Indonesia, taken from Wikipedia. I have a feeling this Cimar would be one of the last ones to have been made in Japan and I’m still struggle to see how they could be making inexpensive guitars in Japan in the mid 1980’s, I had a feeling that everything had already been moved to Korea or some other cheaper country. They guitar seems to be pretty solidly built and has a lot of swanky details like the snowflake inlay and herringbone binding which looks great from a distance. The best part is still the sound, I would never have expected it to have such rich bass and great response, especially not for being fully laminated. A pretty great guitar for the price. If you want to know more about different Japanese guitar brands then check my previous post.

Fujigen Gakki
Fujigen Gakki began operation in 1960 as a classical guitar manufacturer, moving into the lucurative electric guitar markets in 1962. The company was the largest producer of Japanese guitars during the 1960-1980 period. They were known for producing high quality products, especially for the badged guitar market, which is why the company was selected by so many major American brands. It wasn’t until 1970 that the company began making products for the venerable Ibanez brand, which was an unqualified success. Fujigen Gakki was the main manufacturer of choice for Greco badged guitars in the 1970 to 1980 period. They also produced guitars for major manufacturer Yamaha. Badged guitars made by Fujigen include Antoria, Epiphone, Jason and Mann. Badged guitars that may have been made by Fujigen Gakki were Marlin and St. Moritz.

I recently found another Suzuki Three-S F-120. These are great little Japanese built guitars that I can highly recommend. Really sweet tone and pretty descent build quality for being so inexpensive. Of course they can’t compare to Morris or K. Yairi but next to Aria, Maya, Shiro or the normally Suzuki’s they are great. It’s a simple Martin D-18 copy built in 1978 by Suzuki Violin Co. LTD in Nagoya Japan. What always surprises me with these Suzuki Three-S F-120 is how light they are compared to a lot of Japanese dreadnoughts from the 1970’s that can feel pretty heavy and bulky. Unfortunately this one was sold straight away so I only got time to fix it up and make a Youtube video of it before it was gone. If you want to know more about different Japanese guitar brands then check my previous post. 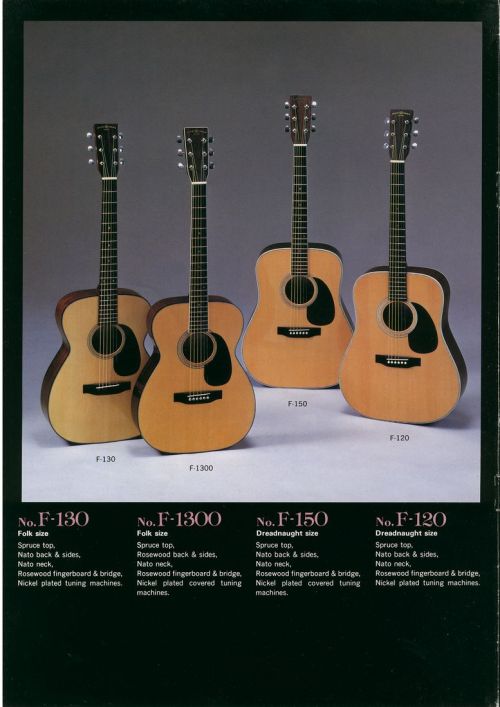 Suzuki Three-S F-120 in an old Japanese catalogue from 1979. It has spruce top, might actually be solid, with a laminated nato back and sides. Nato neck with a really dark rosewood fingerboard and bridge, it almost looks like ebony.